In 2016 Iowa City moved up to the #3 spot on the Best College Towns list. This is up one spot compared to when I originally wrote this post back in 2012. This is a continuing trend in Iowa City – It shows up on lists as a great place to live all the time. Not too long ago I wrote about Iowa City’s #2 spot on the List of Cities for Successful Aging. When you think about it, those are two very different lists to be on. One list focuses on the younger members of the community, the other on older members of the community – Proving once again that Iowa City has something for everyone!

The College Destination Index,(CDI), was compiled by the American Institute for Economic Research, (AIER). The first thing you’ll notice when you look at the list is just how many small towns are on it this year. How did so many small towns suddenly show up on a list that typically includes bigger cities and metros? The answer is relatively simple. The economic downturn caused a cosmic shift. The big cities were hit harder by the recession than smaller towns. Even without reading the report I can confirm that. The housing market in Iowa City took a dip during the last few years, it didn’t flatline like some of the bigger cities!

As a consequence of the failing economy, when the AIER conducted its research there were 3 deciding factors that sent the big guys tumbling down the list. These factors were Arts & Leisure, Unemployment and Entrepreneurial Activity. You might be surprised to see Arts and Leisure and Entrepreneurial Activity as economic variables. I was. After reading the report though I do see that it makes perfect sense. In a failing economy it’s the “extras” that usually feel the pinch. Clearly smaller towns like Iowa City had an easier time keeping up with these important activities.

If you’re relocating to the Iowa City area this is all good information to have. 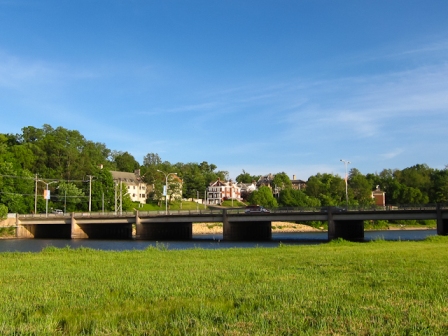 You want to know as much as possible about the economic climate and future stability of an area before you move there. You also want to know what kind of amenities are offered for your free time. It’s not surprising to me that Iowa City shows up on so many lists. The economy is relatively stable. Unemployment is typically quite low. The level of education is high – Clearly if you live in a college town you’ll have a lot of educated people around you! Healthcare is covered with the UI Hospitals and Mercy Hospital in Iowa City. There’s a very good transportation service in Iowa City and Coralville. The quality of life is further improved by an abundance of parks and biking trails. And then there are the obvious benefits of having the UIOWA on our doorstep with a strong focus on the Arts & Humanities.

As if those weren’t enough reasons right there to make Iowa City a great place to live, Iowa City has even more to offer purely due to where it’s located. Chicago and Minneapolis are both easy drives for a getaway weekend. And if the weather doesn’t suit you, (which I have to say is the only down side to living in the Iowa City area for me), Eastern Iowa Airport in Cedar Rapids is just a 20 minute drive from Coralville and an easy way to head for a warmer climate in winter.

Want to talk through your options and figure out whether Iowa City is the right destination for your relocation?  Give me a call at 319-400-0268 or drop me an email. My approach to real estate is more consultative and I won’t try to “sell” you anything. I relocated to the Iowa City area myself in 2000 and have insights on the process, not to mention the challenges involved with moving to the Iowa City and Coralville area.