Below is my very first attempt at a chart in Google Docs. The idea is to visualize data to make it less boring, (although this doesn’t exactly “pop”, I’m hoping I will get more creative as I go along). It shows the number of homes sold by area comparing 2009 to 2008. Below that is a table comparing the median price and the average days on market. 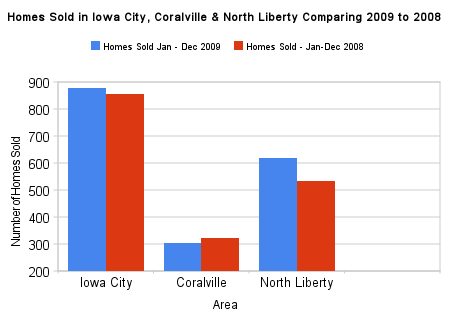 North Liberty had the strongest home sales in the area in 2009 with a 15% increase over 2008. Iowa City showed a modest increase of 3%. That’s a bit misleading, as the end of the year picked up quite a bit with home sales up 33% in the last quarter. That wasn’t enough to make up for the slow start to the year though. Coralville bounces around a bit. Coralville does well with the move-up buyer, but wasn’t able to attract first time homebuyers with stiff competition from North Liberty and Iowa City.